This week's Diva Challenge (# 74) is entitled "String Theory v. X: Eccentric Circles".
Here's the prompt she gave us: "For this challenge - draw a string of eccentric circles ... and get a-tanglin'."

She also let us know that, "according to wikipedia the definition of eccentric is:
Adjective. eccentric (comparative more eccentric, superlative most eccentric): not at or in the centre...not perfectly circular...an eccentric or elliptical orbit having a different center." (I modified the formatting a bit to take up fewer lines, as this is going to be a long post!)

She encouraged us to start with a drop shape and draw cirle-esque shapes radiating our around it. Lots of room for interpretation, though she did provide us with two great examples. Thank you, Laura! I love this challenge prompt! 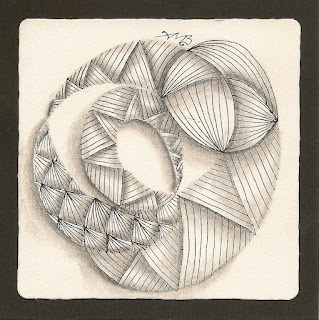 "Eccentric Vergecho" is the title of my first effort to meet the challenge. (The "g" in "Vergecho" is a soft "g", like a "j"...in case you were wondering! And the "ch" is a hard "c" sound like a "k", as in the word "echo.") I decided to utilize only two tangles, and that they, despite the roundedness of the string, would be tangles that are composed of straightish lines. One tangle uses straight-ish lines that converge and the other utilizes straight-ish lines that echo the contrasting segment directions of a zigzag. VING and ZEWM. 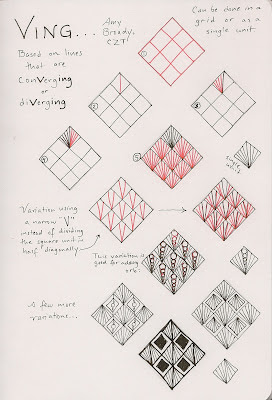 If you have read my archived entries, you might remember "Ving"--a tangle that appeared in my non-dominant hand tile. It just showed up there, and I asked if anyone else could identify it. It's a little like Munchin, but is not so random. And it's a little like Sanibelle by Tricia Faraone, CZT, though Sanibelle is gloriously organic, and this tangle is more geometric...yet despite its geometric base, it conjures up seashell and plant structures. In a post entitled "Diamond Dance" I decided that I would name it "Ving" and provide step-outs. It's taken me a few months, but better late than never. Here they are:

And here is a little selection of ways I have played with Ving:
I have also created step-outs for another tangle that I have never seen named. I have seen this tangle in other people's work, but have NEVER seen it identified! It is similar to Shattuck (an official Zentangle tangle, click here for directions by Sandy Steen Bartholomew)...but has a different personality. It doesn't feature the double lines that divide Shattuck into sections, though it could. This tangle works great as a border or in any long, narrow space. I struggled to come up with an appropriate name...and settled on Zewm. It does come together pretty quickly! But I didn't want a name with "O"s in it (zoom), as it is a straight line tangle. So I took a long hard look at all the letters that are formed with straight lines and selected "E," "M," "W," and "Z" because they utilized zigzags... and, in the case of the "E", parallel and perpendicular lines. Just like the tangle. 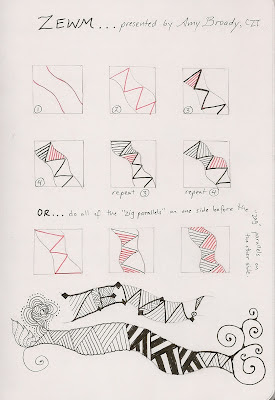 I really hope I have not missed anyone else's publication of a name and/or step outs! I know I didn't "invent" this pattern...but since I love to use it, and I know others do too, I thought it needed its own identity.

Well, that's about all for today! I never finished the post I started last week...and I still haven't written up more details on my fabulous family vacation...or revealed how my son became a Greek god this spring...or mentioned the fun I had presenting Zentangle to Fine Arts Blount, an art guild in Maryville, TN last week...So much to blog about! So come back and visit me again!

Happy to be a

Amy in TN
Knoxville, TN, United States
I am a professional visual art educator (elementary specialist) and a Certified Zentangle Teacher (CZT). I am also Mom to two great teens, one in high school and the other now in college.

Check out the Challenge!